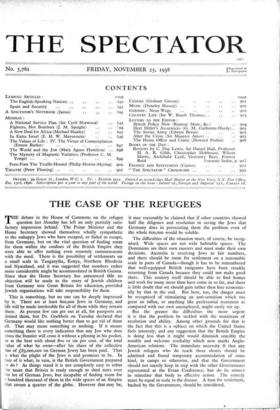 THE CASE OF THE REFUGEES

T HE debate in the House of Commons on the refugee question last Monday has left an only partially satis- factory impression behind. The Prime Minister and the Home Secretary...

T HE Anglo-French conversations, which it was anticipated would deal mainly with defence problems and the Spanish situation, are only on the point of beginning as these lines...

The Future of Ruthenia It is not yet certain what

the future of the autonomous State of Ruthenia will be. At present, it gives Germany a valuable spearhead against Poland and the Soviet Union, with their large Ukrainian...

Crisis in France The opposition to M. Reynaud's financial decrees

almost prevented the visit of Mr. Chamberlain and Lord Halifax to Paris this week. When the Finance Committee of the Chamber met on Tuesday, hostility to the decrees was so...

Unity in Australia The decision to formulate amendments to the

Australian Constitution, which will result in the Commonwealth adopting a more unified system of government, has much to commend it, but it is certain that it will meet with...

By an agreement signed on Monday the northern half of the country, above the narrow neck at Briinn, becomes a Czech enclave in Germany. The Czechs have ceded new territories,...

The Ministry of Supply Despite Mr. Churchill's demand for a

" healthy growl ' from the Conservative benches, the Liberal Opposition '; amendment to the Address asking for a Ministry of Suppl - was overwhelmingly defeated. Yet the Prime...

No one had any quarrel with the aims of Mr.

Stanley's Bill to exterminate the bucket-shop. Mr. Tom Johnston, however, being something of an expert on the ways of shady financiers, was by no means satisfied. He believed...

Allowances for Families The announcement by Mr. L. J. Cadbury,

managing director of Cadbury Bros., that that well-known firm had decided to inaugurate a scheme of children's allowances, comes at a time when interest is focussed on the...

Of debates on Scottish housing there is no end. In

England the twin problems of slums and overcrowding are within measurable distance of solution, but north of the border no such happy ending is in sight. The Bill which the...

The Milk Bill - The Minister of Agriculture has promised

to push his Milk Bill through Parliament even though it " costs him his job " ; nevertheless the Bill is in a bad way. At the week-end the farmers' representatives expressed...

House of Commons was seen at its best on Monday evening in a dignified and impressive debate on racial persecution in Europe and the plight of the refugees. Mr. Noel Baker, who...

I N the simple but significant ceremony that attended the signature of the Anglo-American Trade Treaty at Washington last week the just comment was supplied, very fitly, by the...

above all have I threatened to destroy the peace of Europe—the problem of Czechoslovakia and the problem of Spain. The first has already been settled without provoking a...

T HE talk of a National Opposition, which flared up suddenly in two or three London papers this week, only to subside with equal celerity, appears to have little substance...

By SIR CYRIL NORWOOD (President of St. John's College, Oxford) Meanwhile our Government will not and perhaps dare not impose compulsory national service, and the leaders of...

By J. M. SPAIGHT [In next week's SPECTATOR Nigel Tangye will write on " Bombers, not Fighters "1 B Y " biological control " is meant, in the realm of entomology, the turning to...

By MICHAEL HUXLEY (Editor of " The Geographical Magazine ") I Cha p ter . X.X.IV of his African Survey, Lord Halley 1 states 'that " History will doubtless look back on this...

SADNESSES, terrors, spleen, live pain, dead hope, Each, all, we know ; we have endured them all ; No future and no past for us. We grope, Endurers of a wisdom that is gall ! O...

THE VALUES OF LIFE : IV. THE VIRTUE OF CONTEMPLATION

By ERNEST BARKER The Heaven into which we can rise while we are still on earth is for most of us a mixed Heaven. It comes in different ways and different glimpses. It comes in...

THE WORLD AND THE JEW .

By MARY AGNES HAMILTON T HE organised and continuing Nazi outrages against the Jews have roused an indignation and a sick horror as deep as the vileness of this planned...

THE MYSTERY OF MAGNETIC VARIATION

By PROFESSOR C. M. YONGE The earth is a great magnet with its extremes at the north and south magnetic poles, both of them over one thousand miles from the geographical poles....

By PHILIP HEWITT-MYRING T HOUGH Porn-Porn the truffle-hound had doubtless deserved well of his pays—which consisted of the town and district of Gue du Lez—he could not be...

Lenin in October is one of the best entertainments we have seen in a cinema for a long while, and I hope for everyone's sake that it will soon be shown publicly. Hardly less...

THE 'THEATRE Mussottax (to Chamberlain): " The blue Mediterranean will soon be a Fascist lake." Brivia : " I'll let you keep the Isle of Wight for Nancy Astor's sake." IT was...

Schubert's Sonatas -. LIKE most other " classics," Schubert has suffered from a concentration of attention upon a few of his more obvious masterpieces and a neglect of the...

More Flo;tvers 'Our November spring continues to produce events un- recorded in any garden or other diary. Accounts of these 'untimely marvels come from the north as from the...

[To the Editor of THE SPECTATOR] Sta,—Sir Norman Angell is

evidently one of the many victims of A.R.P. (Air Raid Panic). His article of November rtth says that Hitler is " in a position to threaten the destruction of the British...

in his article on British Policy implies that some of your contributors " think that we ought to have prevented Japan from annexing Manchuria, to have restrained Italy from...

[To the Editor of THE SPECTATOR] Snt,—It is not easy to continue the discussion which you have so far permitted between Mr. Spear and myself, because it involves debate on a...

[To the Editor of THE SPECTATOR] Sit,—In his interesting character-sketch of Herr Hitler in your Christmas number, Mr. A. L. Kennedy seeks to make a dis- tinction between the...

[To the Editor of THE SPECTATOR] SIR,—The question of the military value of the Soviet Army at the present moment, which has been debated in your columns by Mr. J. Baker White...

[To the Editor of THE SPECTATOR] SIR,—With regard to Mr. Lawson's letter concerning foot- and-mouth disease, I can substantiate his statement that Dr. Crofton has discovered...

[To the Editor of THE SPECTATOR] SIR,—Your correspondent Mr. Howard

Perkin in his criticism of the new Penal Reform Bill—made no doubt before its provisions were made public—seems to have a very incom-• plete knowledge of the American method of...

THE HOME OFFICE AND CRIME

[To the Editor of THE SPECTATOR] SIR,—Though I think the context makes it perfectly plain that I had the youthful offender in mind, I regret that in my letter published in your...

THE CONSEQUENCES OF VERSAILLES [To the Editor of THE SPECTATOR]

SIR,—Perusal of Sir Arthur Salter's masterly exposure of Munich sharply reminds one reader of a memorable occasion during the sultry early summer of 1919. Sir Arthur (then Mr....

THE CHARACTER OF STALIN

[To the Editor of THE SPECIATOR] . Snt,—May I be allowed to express my astonishment on reading Mr. E. H. Carr's article on Stalin in your Christmas Number. The portrait of...

THE NEED FOR ABORTION LAW REFORM

[To the Editor of THE SPECTATOR] SIR,—Last summer a poignant case drew public attention to the barbarity of our present law as to abortion ; and the brave action of Mr. Aleck...

[To the Editor ofHE SPECTATOR] SIR,—Doubtless very many readers of The Spectator are also subscribers to the King-Hall News Letter. For the benefit, however, of those who are...

[To the Editor of THE SPECTATOR] SIR,—The comments of Janus in your last issue on the judge's strictures on a surgeon with regard to his fees raises matters of considerable...

BOOKS OF THE DAY By C. DA LEWIS Wait what feelings the writer of these letters would have received their publication may easily be imagined. Incredulity, horror, rage at this...

RESEARCH AND THE FARMER

IT 'is significant that P.E.P., the label adopted by a group of engineers, administrators, business and scientific z men, all interested in planning, should have turned their...

THE CASE FOR THE ARABS

The Arab Awakening. By George Alit (Hamish - HaMilton. 1 5s.) THERE is an element of tragic irony in the _fact that the fi rst fully-documented history of the Arab movethent...

THE author of any work of this type is presumably actuated by considerations either of public duty or private pleasure ; such readers as the present volume may attract will be...

The Silk Road. By Sven Hedin. (Routiedge. as.) Prisoner in the Forbfdden Land. By Gustav Krist. (Fabet and Faber. zas. 6d.) Wyna : Adventures in Eastern Siberia. By General...

The Press. By Wickham Steed. (Penguin Books. 6d.) THE first thing to be said about Mr. Steed's book is that the public is singularly fortunate in being able to obtain for...

Vincent Van Gogh: Letters to Emile Bernard. Edited, trans- lated, and with an introduction by Douglas Lord. (The Cresset Press. t5s.) THESE twenty-three letters are a valuable...

As a market factor totalitarian excesses are still over- shadowing the achievements of the democracies. Here at last is the Anglo-American Trade Treaty, but nobody can...

THE International Tin Committee has decided not to make any

change in the quota for the first quarter of 1939. The free quota will remain at 35 per cent. and the buffer pool contri- bution at so per cent., which will result in the buffer...

SOLUTION TO CROSSWORD No. 321

SOLUTION NEXT WEEK The winner of Crossword No. 325 is Mrs. George H. Rush- brooke, so The Manor, Willenhall, Staffordshire.

BY ZENO [A prize of a Book Token for one guinea will be given to the sender of the first correct solution of this week's crossword puzzle to be opened. Envelopes should be...