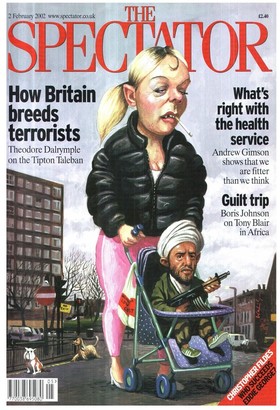 were announced, including a dinner for the crowned heads of Europe at Windsor, concerts in London parks, 500 beacons and a three-month tour by the Queen from Cornwall to the...

W hen the 50th anniversary of Queen Elizabeth II's accession to the throne passes quietly next Wednesday, the loudest noise is likely to be the continued squabbling over...

There has been a paradigm shift in politics, but only the LibDems seem to understand the new rules

PETER °BORNE P olitical journalists no longer possess the tools to report events at Westminster. The laws of politics have changed. But journalists try to carry on as if...

I 'm a sentimental sort. At public readings I perform a poignant haiku inspired by the place I live. 'Hackney — where the schoolkids and the council tax get higher every year.'...

In the end it will be America v. the Rest of the World. Whose side will you be on?

MATTHEW PARRIS J ournalists are rather like fleas. We bed ourselves down on the furry rump of something much larger than ourselves, and there we feed. We may irritate the...

CREATURES OF THE CULTURAL CRINGE

Theodore Dalrymple says the Tipton terrorists were encouraged in their hatred for Britain by the contempt for Western civilisation that is now almost mandatory among many white...

SO Ivan Massow (chairman of the Institute of Contemporary Arts) thinks conceptual art is rubbish. Oh dear. According to Pliny the Elder (who died investigating the eruption of...

Africa is a mess, but it is simply not credible to blame colonialism, says Boris Johnson YOU would need a heart of stone not to have been moved by the little Aids-ridden...

Go east, young man, says Colin R. Nicholl, but whatever you do, don't get involved in a car crash SO the great plan has finally been executed: the first NHS patients have been...

IN PRAISE OF THE HEALTH SERVICE

Andrew Gimson says that we are better off than we know, not least because we have fewer doctors than the French and the Germans THE immense virtues of the National Health...

Theo Hobson says that if the C of E wants to stop being a national joke, it will have to be disestablished FOR those of us who care about the Church of England, the eruption...

WHAT do you call your food if there is not enough salt in it? Insipid, yes, or tasteless, but if you live in Cornwall or Devon you might say — or have heard someone say — fresh....

A weekly survey of the things our rulers want to prohibit THE life of a backbench MP is not a greatly challenging one — judging from the early day motions that they table....

Vanity is a man's fault but a woman's profession

PAUL JOHNSON T he Labour Poet Laureate was asked to read a poem during the party celebrating the centenary of the TLS. Not a good idea, for the chattering classes do not like...

From Mr Phillip Hardy Sir: It appears to me that Stephen Glover (like that peculiar Matthew Parris, who seems to want Britain to `sit out or 'hang back' from everything) is...

From Mr Rmy O'Keeffe Sir: Perhaps The Spectator will correct the ridiculous distortions of Mark Step (`How ridiculous can you guys get?', 26 January). He states that the Royal...

into saying something that has been growing in my mind for some time. When Britain backs America, all we can expect in return is good-natured contempt. If we, or any among us,...

From Mr Frederick Forsyth Sir: Your correspondent Robert Henderson (Letters, 26 January) joins the large British chorus denouncing the Americans for not according the detainees...

From Mr P. G. Urben Sir: Michael Randall (Letters, 19 January) suggests that, before about 1960, everybody would have acknowledged that Western lives are more 'precious' than...

Sex is not the problem

From Mr Simon Bott, FRCS Sir: A more useful way of looking at the frequency of prostate cancer is the agematched incidence. This is the incidence at a given age and is stated as...

From Mr Anthony Baldwin Sir: It is a peculiarly English thing to need to demonstrate that one is half-educated, barely articulate and, by extension, utterly harmless for fear...

From Mr Timothy O'Sullivan Sir: Paul Johnson (And another thing, 26 January) can hardly blame Harold Wilson for landing us with 'the dreadful Bishop of Durham'. It was not...

From Mr Douglas Adler Sir: Christopher Fildes (City and Suburban, 26 January) may have found the best tax haven to live in, but he has not addressed the vital question of how to...

From Dr Simon Farmer Sir: Like most neurologists I am prone to bouts of hypochondriasis often centred on the diseases we treat, and déjà vu can be a symptom of an unpleasant...

STEPHEN GLOV ER T he press is full of fascinating disclosures about Labour's links with Enron and — following my colleague Peter Oborne's brilliant piece last week — with the...

King of his jungle

A romantic novel without the throbbing manhood

Francis King MR FOREIGNER by Matthew Kneale Weidenfeld, £10, pp. 155, ISBN 0297828991 L ike the Booker, the Whitbread has produced some controversial and occasionally even...

From geometry to nature

Hilary Spurling S now fell on the Chantry, and on a small area of the Somerset levels immediately around it, on 4 April 2000, the day Anthony Powell's ashes were consigned from...

Stir up the zeal of women

Image and Idol: Mediaeval Sculpture (Duveen Galleries, Tate Britain, till 3 March) Shaken and stirred Martin Gayford W hen you come to think of it, the territorial zones of...

Uninspired Mozart Michael Tanner T here is dispiritingly little to say about Covent Garden's new production of Don Giovanni, except that it is not a disgrace, as the recent...

Memories (Royal Opera House) Betraying Bach Giannandrea Poesio M emories is not just the title of a famous song from one of the West End's long-running shows, it is also the...

Gosford Park (15, selected cinemas) The servants have it Marcus Berkmann Cu have to be terribly careful with Robert Altman films, Some (Nashville, Short Cuts) are marvellous....

Sheridan Morley believes that London's theatreland is in need of a radical shake-up I n view of the current climate in the West End, the Mayor of London, Ken Livingstone, has...

It's honkers Simon Hoggart T he oddest television drama of the week was the new Oxo ad. Boyfriend is leaving the family kitchen, says on the way out how much he wishes he...

Michael Vestey I was sitting in my local pub, the Benett Arms, one lunchtime last week when a nice old chap came in and announced that he'd just been listening to Jimmy Young...

The next best thing

Robin Oakley A heavy cold, uncertainty at the hour of commitment to the road whether the wet might prevent racing at Cheltenham and the need to minister to Mrs Oakley, fresh...

Taki I ,Rougemont got to like Andy Warhol a lot, but only after his death. Reading about him in the Sunday Telegraph in connection with the Tate Modern upcoming exhibition...

Jeremy Clarke S ince being elected vice-chairman of our Lurcher, Terrier and Ferret club a year ago, I haven't attended a single monthly meeting. Last week, however, I made the...

Petronella Wyatt I am not supposed to write about Florida, Last time I did so, the locals were unfriendly. This is because I said that Florida was a great place to live if you...

11-TANK you so, so much for all your letters of encouragement and support which, after my last column complaining that this job was beginning to pall rather, would have flooded...

Simon Barnes IT is a truth universally acknowledged in sport that you've either got it or you ain't — the 'it' in question being the ability to win. This is quite separate from...

Q. Last year my wife and I moved into what

might be described as a 'substantial property' in south London. The house was formerly a school and a small annexe attached to it was sold separately. While our house is number...

Q. I have recently reverted to bachelor status, and have

been fortunate enough to find spacious accommodation on the top floor of a house owned by an elderly female friend. The only problem is that my 'landlady' has failed to provide...

Q. I live in the sort of street where the

neighbours don't talk to one another. An extremely good-looking man has moved in across the road, and is apparently living alone. How can I make his acquaintance? CS., London...