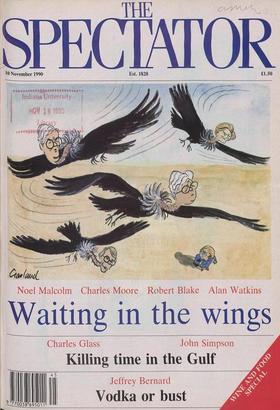 No merger S it Geoffrey Howe resigned from the Cabinet over the Prime Minister's attitude to Europe. In the resultant Cabinet reshuf- fle Kenneth Clarke was appointed Educa-...

i would stay for an answer, which is a natural reaction. What is a just war? What is a just peace? When these questions are asked the usual reply is a dismissive laugh. But an...

I t is no good blaming Mrs Shirley Wil- liams for the failure of most MPs and nearly all lobby correspondents to under- stand the rules for the Conservative lead- ership...

Mrs Thatcher's honesty on Europe is the best policy CHARLES MOORE 0 ne reads quite often (I think I have Written it myself) that the issue of Europe is an excuse for the...

HOWE NOT TO DO IT

`Consensus', argues Noel Malcolm, has little to do with Europe, and even less to do with Sir Geoffrey Howe `I WOULD far rather see us in the Community exerting influence, as...

TRAGIC EVENTS As in 'rebuilding confidence after the tragic events of 4 June,' the phrase appears consistently in Foreign Office material that is in- serted in the press. Lovers...

Robert Blake thinks Mrs Thatcher should listen to her critics, or face disunity and defeat HISTORICALLY the great strength of the Conservatives has been to avoid schism and...

NO RULES FOR KILLING

Charles Glass on the appalling results if Saddam Hussein uses gas Napoleon never ceased complaining to Kutu- zov and to the Emperor Alexander that the war was being conducted...

A DAY AT THE BAGHDAD RACES

John Simpson waits to be bombed in the capital of Iraq Baghdad THE 4.40 race at the Baghdad Horse- manship Ground would, according to the small, seedy man in thick spectacles...

A reader received this letter explaining the one he received from the 'Ann Camp Customer Postal Service' (Unlet- tered, 27 October). Dear Sir: We are sorry for the letter which...

THE MAN WITH THE BIG MOUTH

GETTING TO MEET THE EMPEROR

Peter Mullen on the way the Church of England has trivialised death FUNERALS are not what they used to be. I went to a hospital chapel to pay last respects to a friend's...

A GALE FOR ALL SEASONS

The press: Paul Johnson recalls an oldfriend and former Spectator editor GEORGE Gale belonged to an en- dangered species, the educated journalist. His English was superb:...

persist . . . LAST week a patient arrived dressed like the late Enid Starkie, in all the colours of the Rimbaud. To put it another way, she reminded me rather of the Perdita...

GUINNESS bid for Distillers five years ago, and the second of the Guinness trials will, next year, finally reach the courts. This week brought a pre-trial hearing, at which the...

DEAR Treasurer: Thank you for your letter of 5 November, in which you notify this bank that your borough intends to default on its obligation. You had freely entered, at your...

ONLY the comma, and the word that comes after it, now mark the scar on Baring Brothers and Co., Limited. A century ago the Barings' merchant banking partnership had to be...

THE sage of the property market, Bruce Kinloch, is expecting a kissogram. A charming young lady has been telephoning his office, urging him to ring Katie at the Bristol...

Sir: In his article about me (City and Suburban, 27 October), Christopher Fildes writes, 'Inflation, said one or both of the Lawsons, would be judge and jury'. This observation...

Sir: I was most interested in the article about Danny Chamoun (Death in the morning', 27 October) mentioning his father Camille Chamoun and his rude arrest by the French on the...

Sir: May I comment on the letter of my valued

friend Christopher Booker, whose own integrity in this affair is beyond question? 1. Brigadier Cowgill made a serious error in calling a press conference, which ensured that...

Sir: There is much that might be written about the Booker-Cowgill 'Inquiry' into the repatriation operations: too much, I fear, to attempt to introduce into your correspondence...

Should we be told?

Sir: Poor old Alan Watkins (Books, 3 November). Until I read his review of my book Listening for a Midnight Tram, I had no idea of what a slave-driver I had been or of how I had...

Sir: I felt compelled to respond to Brian Inglis's continued rantings on the subject of Northern Ireland (Letters, 13 October). First of all, a few facts. The Conservative c...

Sir: Piers Paul Read uses his review of Lawrence Stone's The Road to Divorce (13 October) to advance a subtle yet reaction- ary defence of marriage at any cost, even when...

Sir: I think that I can attribute my early appearance before the parole board to an improvement in my character which is a direct result of regularly reading your journal, which...

Sir: For the record, the plant which Grin- ling Gibbons used for abrading his carvings is Dutch rush — not `Dutch iris', as unaccountably appeared in the title of my article...

Sir: The rich are such easy targets, aren't they? (Wean streets', 13 October). But they are determined to remain so. I too have recently been out collecting, for Action Aid in a...

Sir: Simon Courtauld, and Peter Kemp, are in error (Books, 27 October) in de- scribing 'General Walter', divisional com- mander in the International Brigades, as the Hungarian...

The writers are off Christopher Driver AS FOOD is perishable, so are its com- mentators. There is a gaseous perishability about most present writing in English on food,...

Embarras de richesses Harry Eyres T here is an early Arthur Miller play called The Man Who Had All The Luck, which is a kind of reversal of the Book of Job. A young man, David...

Soup operas Indigestible plots John Diamond F rom its birth The Archers has been haunted by a phantom cast. Hobbs, Grey Gables' outdoor factotum, is often spoken of but never...

Wining and dining Jennifer Paterson A ll Souls and All Saints have passed me by, which is just as well as I have been told to write about wine. I am certainly no expert, so I...

THE Prince of Wales on Tuesday opened the "City and South London Railway," a new and most important experiment in the locomotion of great cities. The line is three miles long,...

Serving God and mammon Christopher Hill THE CAUSES OF THE ENGLISH CIVIL WAR by Conrad Russell OUP, £35, £10.95, pp.236 T his is in many ways a brilliant book, which will...

What are little boys made of?

A rebel on both sides of the law

David Nokes HENRY FIELDING by Donald Thomas Weidenfeld & Nicolson, £25, pp. 436 T his is the second fat, full-length biography of Fielding to appear in the space of a year....

Strife between his good and evil side

On the Death of Margaret Lockwood

All the old picture girls are dying, The proud posed queens Of the magazines under the cushions The black-and-white touched-up Ladies of all the Annuals. Soft millions of dots...

Confessions of a braggadocio

Paul Bailey YOU'VE HAD YOUR TIME by Anthony Burgess Heinemann, £17.50, pp. 403 I f somebody told me that Anthony Burgess can sing 'Annie Laurie' in Swahili, should not be in...

Without hesitation, repetition or any deviation at all

Their Hermitage for a gorgeous palace

John McEwen PAINTINGS IN THE HERMITAGE by Colin Eisler Stewart, Tabori & Chang, £60, pp. 653 T his is a companion volume to Paint- ings in the Musee d'Orsay, published last...

Change and decay not all around

Harking back Marcus Berkmann A s one of the more ephemeral art- forms — nestling neatly between perform- ance art and origami — pop music is not really supposed to have a...

A question of place Martin Gayford L ast year a young American saxophon- ist remarked to me that jazz `used to be a local thing, but it's not any more'. Which is a truth both...

Visions of Venice (Bankside Gallery, till 2 December) In the Shadow of Vesuvius (Accademia Italiana, till 27 November) Skills of seeing Giles Auty R ecently I was told the...

On the prowl in Prague Taki Prague I had heard about 'Prague the Golden', but wasn't prepared for its patina and dignity. The city is like a hauntingly beautiful woman whose...

Land of the repressed Martyn Harris N ippon, now halfway through its eight-part run (BBC 2, 8.35 p.m., Sunday), has been watchable, but a bit of a slog so far. It is not...

Feet of clay Jeffrey Bernard new nut arrived on the scene last Monday. She is a sculptor called Sue and she came into the Coach and Horses to model my wretched head in clay....

Ordeal by radio Zenga Longmore T here is, as I expect you are aware, an ancient belief that only childless men are able to fight valiantly in battle. Men with children, so...

Prejudice rules OK Jaspistos 12 YEAR OLD SCOTCH WHISKY I n Competition No. 1650 you were in - vited to describe in amusing verse the qualities of a nation that you do not...

Level crossing Raymond Keene W ith one game to go in the New York section of the world championship the scores are still level. Defensive play has been taking precedence over...

CROSSWORD 984: Filer a l'anglaise? by Jac

The best man's speech at a wedding is rarely good. You are invited to provide an extract (maximum 150 words) from a really toe-curling one. Entries to 'Competition No. 1653' by...

Chilly and Horse Frank Keating I'VE been IA ith the All Blacks rugby side in France. There was the mother-and-poppa of a punch-up at Nantes on Saturday, and the great...