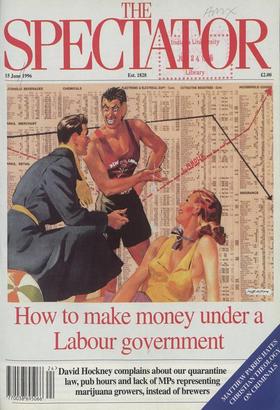 Many works of art are now considered to be Major forgeries D elegates for talks met at Stormont in Northern Ireland. By the agreed policy of the British and Irish governments,...

Europe has almost wrecked the Tories. They must now turn it to their advantage BRUCE ANDERSON I t may seem an extraordinary assertion, but it is also a true one: a...

ALAN WATKINS h e clearest sign of our political degener- acy is the National Lottery. Do not misun- derstand me: I have no objection at all either to our having a lottery or to...

The Archbishop's evasions are supposed to bring reconciliation. But they leave me furious MATTHEW PARRIS N obody who writes for newspapers believes all he reads in them, so...

via that institution of which even 'new' Labour is wary: the stock-market FOR THOSE in the City with long enough memories, Labour governments denote rampant inflation, high...

Roy Jenkins compares political life in Gladstone's time with that of today From a lecture delivered in the Old Library of the Guildhall, at the invitation of the Cor- poration...

BRITAIN: A DOG'S LIFE FOR SO MANY

Like pub opening hours and drug laws, our quarantine rules are the sign of an undemocratic society, says David Hockney In the 25 May issue of The Spectator, Rory Knight Bruce,...

`NOW I know how you feel', my hus- band replied, 'when people ask you stupid questions.' `But all I asked, darling, was what the connections are between anomie and...

WHERE IT'S LEFT-WING TO DENY THE HOLOCAUST

Douglas Johnson explains why, in France, two famous champions of the poor can claim that the Jews' wartime fate is a postwar myth Paris HE IS the most popular man in France,...

Playing the quality card in England's green and pleasant land PAUL JOHNSON G ood may yet come out of the mad cow crisis. In the first place, it has set us thinking seriously...

REINVENTION of another kind is under way at Barclays de Zoete Wedd, which, needing a new chief executive, has hired Bill Harrison away from Robert Fleming. Under his robust...

IT IS ten years since Rupert Hambro peeled off from his family bank. With his father and two brothers, he set up J.O. Hambro — named for Jocelyn, his father, and in City...

Here's a test case for how to help industry try getting out of change's way CHRISTOPHER FILDES T he managing director is the one who knows where the factory is and even goes...

I AM delighted to bring news of the Society of Merchants Trading to the Continent. A year ago this grand old City institution was on its last legs, a victim of the blight which...

THE HEADHUNTERS had their work cut out to find the Stock Exchange a chief exec- utive. It had fired the last one, and the one before, and I know of two possible candi- dates...

The mood he's in

HAVING GOT this far, I found myself tun- ing in to Will Hutton's television series, False Economy. In it, he develops the ideas which are said to be such an influence on...

Sir: I wonder what Peter Oborne means when he writes, 'Everything is perfectly straightforward in bed as far as Mr Norris is concerned' (`The one who got away with it', 8 June)....

Sir: Anne McElvoy seems to have misread the expression on Peter Mandelson's pinched white cheeks as I interviewed him over dinner at Interlude de Chavot last February CI danced...

Sir: Rael Jean Isaac thinks that prospects for the preservation of Israel's Jewish and Zionist character will be better — as a result of the coalition between the religious...

LETTERS The council that cares

Sir: Alfred Sherman's article (`Shirley, champion of the heart of Britain', 25 May) describes well the aims of those of us in Westminster council who have sought to save the...

Sir: During your predecessor's time there was talk of putting pictures of your regular contributors at the head of their articles so that those of us far away from home would...

Sir: Peter Phillips's article (Arts, 25 May) on the supposed malaise currently affecting the classical recording industry is one-sided and highly misleading . Yes, there are...

Sir: A question to radio's Brains' Trust dur- ing the war was on the lines of 'Is the pun the lowest form of wit and humour?'(Lead- er, 1 June). The panel of Joad, Huxley and...

Sir: Lady Astor (if it was she) said, 'Navel engagement

Sir: I am amused to read that Jan Morris thinks

John Major 'slightly makes up' for the least prepossessing British government in living or historical memory and might even be a 'decent enough sort of fellow'. Tch, tch. Such...

Sir: Bruce Anderson is wrong in attributing the famous cartoon 'Very well, alone' to the Daily Mirror cartoonist, Zec (Politics, 25 May). It was drawn by David Low, and appeared...

Sir: Jan Morris need not worry that the Conservatives will win the next general election (`Mr Blair, loser of the Labour Party', 8 June), although she may be right to question...

If you're very slightly famous, and disagree with Mr Dacre, board up your windows STEPHEN GLOVER P ul Dacre, editor of the Daily Mail, is not a household name. His face is not...

Why I am unfit to lead the free world PETRONELLA WYATT W ho will speak for Mr Clinton? Sure- ly the choler, the dyspepsia, the indignation has gone far enough. Mr Clinton's...

BAD TIMES IN BUENOS AIRES MIRANDA FRANCE ARGENTINES have a word for the way they feel: bronca. An Italo-Spanish fusion, like most Argentines themselves, the word implies a...

Her own best friend David Sexton INSTRUCTIONS NOT INCLUDED by Paula Hamilton Michael Joseph, £15.99, pp. 304 t is strange that the cult of the model has taken so long to...

Only a memory of the same

Main de Botton ALL RIVERS RUN TO THE SEA: MEMOIRS, VOLUME I by Elie Wiesel HarperCollins, £20, pp. 432 I t is incumbent upon the Jewish writer to be witness to all that has...

To order this book at the special discount price of

A miss is as good as Amis

Caroline Moore ALTERED STATES by Anita Brookner Cape, £14.99, pp. 220 A nita Brookner's new novel has the bold title, Altered States, which may lay her open to a few...

Always true to you, darling

Anita Brookner SHADOW BABY by Margaret Forster Chatto, £15.99, pp. 346 R eaders of this enthralling chronicle are advised to have a pencil and paper handy and to spend a few...

Peter Jones UNDERSTANDING GREEK SCULPTURE by Nigel Spivey Thames & Hudson, £28, pp. 240 M ost art these days could be confused with anything else. It is designed as 'art' by...

To order this book at the special discount price of

A traveller from several antique lands

Something or other doth hedge a king

We have seen the moment of his greatness flicker

Exhibitions 1 Picasso and Portraiture (Museum of Modern Art, New York, till 17 September) Are you a masochist? Roger Kimball W hat more can one say about Picas- so? Long...

Summer Exhibition (Royal Academy, till 18 August) Summer's truffle hunt Martin Gayford O h to be in an art gallery now that summer's here! But preferably not at the Summer...

Edward Lucie-Smith visits the new gallery at the School of Oriental and African Studies P ure coincidence, and the vagaries of my opera subscription, led me to a perfor- mance...

The Spectator index for July to December 1995 is now available. This six monthly comprehensive alphabetical listing of subjects, titles and contributors is a necessity for...

Chelsea bliss Ursula Buchan E ver since the days of Lord Abercon- way, the last president of the Royal Horti- cultural Society but two, it has become tradition for each year's...

Camelot (Freemason's Hall) Habeas Corpus (Donmar Warehouse) Oh, what a lovely score! Sheridan Morley T here was, once upon a time, an era of magical entertainment in which...

Delivery systems Michael Vestey D id you know that radio and television are 'delivery systems'? In a strict, bloodless and technical sense they are, of course, in that they...

No suspense just disbelief James Dehngpole I would never let my honorary nine-year old stay up to watch American Gothic (Channel 4, Wednesday), but not for the reasons you...

Shoot-out brewing Jeffrey Bernard A I have said before in these columns, the older I get the more tetchy, irritable and reactionary I become. The tetchiness has reached...

A mean business Leanda de Lisle I f I felt I could afford to buy the Thomire clocks and Old Masters displayed at the Grosvenor House Antiques Fair, I would spend a civilised...

BRIDGE Count down Andrew Robson AN ABILITY to count the opponents' hand is essential in the quest to become an expert. Don't be daunted — it comes natu- rally with practice,...

URA IN COMPETITION NO. 1936 you were invited to supply helpful mnemonic verses for those who have difficulty remembering the names of the seven dwarfs (or dwarves) in Snow...

IN-THE-STRAND CHESS SIMPSON'S IN-THE•STRAND First blood Raymond Keene WITH the break-up of the USSR it was expected that the momentum for chess organisation would move...

A first prize of £25 and a bottle of Graham's Late Bottled Vintage 1989 Port for the first correct solution opened on 1 July, with two runners-up prizes of £15 (or, for UK...

To enable competitors to economise on postage, entries for one or more weeks of the competition and/or crossword may be posted together under one cover addressed 'Competition...

Printed below is a poem of this title by Christian Morgenstern. You are invited to supply a verse translation, close or loose. Entries to 'Competition No. 1939' by 27 June. Es...

Sassenachs beware? Simon Barnes SCOTLAND'S ambitions of global conquest are traditionally obscured by their obsession with the place on the other side of the wall. This is as...

Dear Mary. . Q. I was dining and staying overnight with some friends in a fairly grand house in Gloucestershire, and my host and hostess had to leave early next morning to...